The Music Business Association (Music Biz) will present its Outstanding Achievement Award to record-breaking hit “Despacito” — by Luis Fonsi featuring Daddy Yankee along with Justin Bieber on its remix — at the Music Biz 2018 Awards Luncheon during its 60th annual conference on May 17 at the Omni Nashville Hotel. 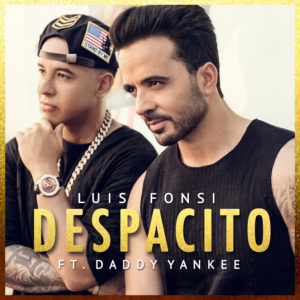 Released on January 13, 2017, “Despacito” — which is primarily sung in Spanish — quickly became a dominant Latin smash, debuting at #2 on Billboard’s Hot Latin Songs chart and reaching #1 a month later, where it has remained for 42 non-consecutive weeks, breaking the record set by Enrique Iglesias’ “Bailando” featuring Descemer Bueno and Gente de Zona. A remix featuring Justin Bieber was released the following April, jolting “Despacito” to #1 on the all-genre Billboard Hot 100 chart, the first primarily Spanish song to do so since “Macarena (Bayside Boys Mix)” in 1996. The track held the top spot for 16 consecutive weeks, tying the record previously set by Mariah Carey and Boyz II Men’s “One Sweet Day.” “Despacito” has since become the first-ever Latin single to be certified Diamond by the Recording Industry Association of America (RIAA) — with over 10 million sales and track-equivalent streams — and currently reigns as the most-watched video in YouTube history, with over 4.7 billion views. It was also the first primarily Spanish song to top 1 billion streams on Spotify. The track was recognized with four Latin GRAMMY Awards, including Record of the Year and Song of the Year, as well as two American Music Awards for Collaboration of the Year and Favorite Pop/Rock Song. It also received three GRAMMY Award nominations for Record of the Year, Song of the Year, and Best Pop Duo/Group Performance and currently sits near the top of the list of finalists for the 2018 Billboard Latin Music Awards, with Fonsi and Daddy Yankee each finalists in 10 categories, Bieber up for eight, and the song itself up for six.

“No other song in the past year illustrates so perfectly the way that music overcomes barriers quite like ‘Despacito,’” said James Donio, President of Music Biz. “Throughout 2017, the track dominated more than just the Latin charts, proving that fans will embrace music from cultures and in languages that are foreign to them. We are really excited to recognize the song and the artists’ success at Music Biz 2018.”

“My heartfelt thanks to Music Biz for honoring ‘Despacito’ and its achievements,” said Fonsi. “The amazing response from around the world has been overwhelming in the best possible way. This is an exciting time for Latin music, and I’m just so honored that the world connected to the song, a Spanish song, and to see all of these beautiful countries singing in Spanish. Thanks to Daddy Yankee, Justin Bieber, Erika Ender, Andres Torres, and Mauricio Rengifo. Thanks again to Music Biz and, of course, my fans everywhere!”

The Music Biz conference is the music industry’s premier event, giving the commerce and content sectors a place to meet with trading partners, network with new companies, and learn about new trends and products impacting the music business, as well as music creatives a place to discuss their craft and learn more about the legal, metadata, financial, and other matters that impact their royalties. The 2018 event, which will celebrate the Association’s 60th anniversary, will feature the presentation of the Presidential Award for Outstanding Executive Achievement to Cary Sherman, CEO of the Recording Industry Association of America (RIAA); the Harry Chapin Memorial Humanitarian Award to Scooter Braun, who will also participate in a Keynote interview; a Breakthrough Artist Award to Republic Records singer/songwriter Julia Michaels, and the Independent Spirit Award to the Radakovitz Family, owners of the iconic Sacramento, CA-based record store chain Dimple Records. In addition, music industry veteran Lyor Cohen, Global Head of Music at YouTube/Google and Founder of music content company 300, will Keynote a Featured Presentation and Wendy Goldstein, EVP of A&R at Republic Records, will Keynote the Music’s Leading Ladies Speak Out sessions. For the full Music Biz 2018 preliminary schedule, visit musicbiz2018.sched.com.