Now in its eighth year, the Music Biz Entertainment & Technology Law Conference offered poignant discussions on the most pressing issues facing the music business today. The event, which sold to capacity, was hosted at the office of Greenberg Traurig in New York City, with support from BMI and Fox Rothschild LLP. This year’s conference offered attendees spirited conversations among the brightest minds in the technology and entertainment law sectors about rapid advances in blockchain technology, the latest on mechanical and synchronization licensing in the digital age, the challenges of licensing music to podcasts, and the ongoing work of combating sexual harassment and discrimination in the entertainment industry. 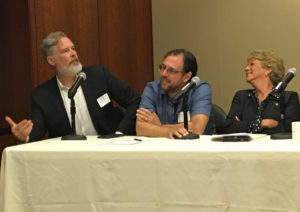 Over 42 million Americans are listening to podcasts on a weekly basis, bringing in $314 million in ad revenue in 2017, according to the IAB. Consumer attention has become a valuable commodity and measurable metrics are only improving, so labels and publishers are eager to capitalize on podcasts by licensing their music to creators. The day’s first panel delved into the reasons for the medium’s success, how licensees can best respond to audience behavior to best engage with their music, and the barriers of entry for major labels to reach podcast audiences. For example, it was pointed out that consumers regularly listen to shows with hosts they feel they can trust who provide genuinely interesting content that is not overtly commercial.

Podcasts are also typically small operations that do not have the knowledge to navigate licensing deals or the means to license music from major labels. Podcasters in turn ask independent songwriters to write original pieces for their shows and pay them outright, leaving plenty of money on the table for major labels. The discussion yielded three possible lucrative solutions: blanket licensing label music for use on podcasts; labels licensing to podcasts for free to promote certain songs and podcasts paying the publishers for licensing; and labels hosting their own shows, providing both an interesting narrative of the label’s history and a platform to promote their artists without the issue of outside licensing. 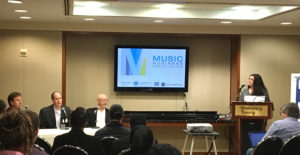 As the majority share of music consumption shifts from purchasing physical hardware such as CDs and cassettes to on-demand digital streaming platforms, what value does a song have in the digital age? And, what is the best way to offer mechanical licenses to these services to ensure artists, songwriters, and all other parties involved are receiving their fair shake? The day’s second panel offered competing opinions between 1-to-1 direct licensing through private entities like Audiam, with panelist & Audiam Founder & CEO Jeff Price saying it’s worth the work to cut individual deals, and issuing bulk licenses on collections of tracks with an automated process as Music Reports provides. Both sides did agree that compulsory licensing was not a viable solution, as it aids in devaluing individual recordings and would not benefit stakeholders in the long run.

The panel also touched on the Music Modernization Act (MMA), which to date has passed both houses of Congress and is awaiting a presidential signature. There is some disagreement of how the changes brought about by the MMA will have on the collection of royalties. The two arguments presented were that A) it will either hurt the songwriter submitting their details to the Mechanical Licensing Collective (MLC) formed by the MMA because of insufficient data entry which may lead to certain stakeholders not receiving payment, or B) that the MCL would serve to collect “lost liter” royalties to support in rare cases where 1-to-1 licensing doesn’t happen. It was agreed however that the MMA serves as a step towards a more viable solution, with panelist Ronald Gertz, chairman & founder of Music Reports, calling the bill, “a repiping of where funding from music royalties should flow.” 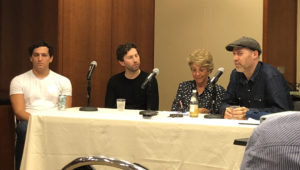 The blockchain revolution mimics the Internet’s rise to prominence in the 1990s and we are still in the stage where blockchain’s potential for specific applications are not yet completely realized, particularly in the music business. And, given how the use of technology to modernize how music is interacted with, why have we not yet modernized the data behind music? This panel discussed how blockchain solutions can offer direct-to-consumer exclusives to music fans as extra incentive to purchase music and further support the artist beyond streaming a song on a service. Also explored were the potential advancements blockchain can have on the music file, such as adding “smart contracts” between a purchaser and an artist to streamline the collection of royalties and to improve security on digital music files.

In fact, some of these advancements are already in place today. Ujo Music, co-founded by panelist Jesse Grushack, offers a blockchain-based platform where artists can upload and publish their songs and copyright information and receive automated, instant royalty payments via cryptocurrency transactions. Despite this implementation, there is still little legal precedent to ensure the system can continue to run deregulated and securely. PledgeMusic Co-Founder Benji Rogers applauded the steps taken to implement blockchain so far, but called on the legal minds in the room to explore the topic and solve its potential security problems. Citing the example of how standardizing derivative trading led to a sharp spike in profits, Rogers added, “There’s a lot of money to be made, come join us.” 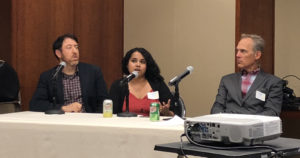 According to panelist Jessica Sobhraj, CEO of Cosynd, the average hit song takes a team of four or five people just to write. When considering how many additional people it takes to prepare a YouTube video, there are a great number of parties who should be paid and proper synchronization licensing is extremely important. The issue today is that there are so many creators who need to obtain sync licenses for their content that the workload is greatly increasing, so automation will be necessary to fulfill their needs. The day’s fourth panel, moderated by Synchtank, covered the need to and benefits of automating the process of obtaining sync licenses, and the importance of user-friendly experiences for uploading copyright information.

The digital age has made logging of copyright information easier, moving past the days where boxes upon boxes of written license information needs to be logged into computer systems. Distribution services like CD Baby requiring artists include all proper credits prior to posting music on digital marketplaces or streaming services. This makes the eventual process of licensing for recordings and even performances — like the given example of dance studios — much easier. Law firms are also looking to automate their services, with close to 50 percent of firms surveyed by Thompson Hine saying they are looking to automate processes in 2019. In the end, giving rights holders the tools to manage their own copyrights and providing both administrative services and legal guidance as technology gains prominence will be essential as the future of automated sync licensing takes shape. 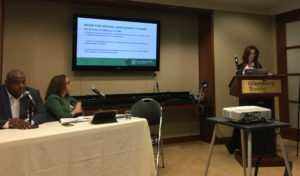 The day’s final panel addressed the important topic of sexual assault and harassment in the workplace, and how the sweeping #MeToo Movement has influenced changes both in the court of public opinion and in modern entertainment industry employment contracts. The panel as a whole offered a rebuke of the industry’s old “anything goes” model of “Sex, Drugs, & Rock N’ Roll,” and discussed the practical changes in state laws resulting from the courageous fight of sexually harassed parties. In New York State for example, this includes extended the statute of limitations on reporting sexual harassment and assault to three years, prohibition of non-disclosure agreements unless the harassed party requests them, mandatory interactive sexual harassment training for all employees, and extended liability to the employer and co-workers to reinforce reporting.

The conversation then shifted to zero-tolerance clauses in new employee contracts and the message they send to new employees that the company’s reputation is far too important to risk on someone acting in an uncivilized and biased way. The idea of mutual morals clauses were discussed, with the example of a performing artist and a festival entering into an agreement that if one party violates the contract by acting immorally, the other party can walk away knowing they will not lose out financially for doing the right thing. The key takeaway from this conversation was that in light of the courageous work of all parties unified in the #MeToo Movement, the time is ripe to change the workplace culture which has long supported sexual harassment and bias to one of inclusion and support for victims. As the movement soldiers on, the institution of zero-tolerance policies is critical to properly reinforce this transition and to help steer the ship towards a more equal workplace. 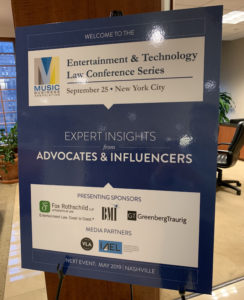 Thank you to all who attended, and to our partners  for your help in making the conference a success! Our next conference series will take place during Music Biz 2019, set for May 5 – 8, 2019 at the JW Marriott in Nashville. Stay tuned for more details leading up to the event!