September 12, 2017 – The competition among platforms and services is impacting music consumption and changing the way people of all ages engage with their favorite artists and songs, according to fresh data from AudienceNet/LOOP provided to the Music Business Association (Music Biz) for its members. The new report, titled “Music Consumption: The Overall Landscape 2017,” will be released on Thursday, September 14, via Music Biz Consumer Insights, the interactive, member-exclusive research portal hosted on www.musicbiz.org. The report findings are based on a June 2017 survey of a nationally representative sample of 3,006 U.S. respondents (aged 16+).

Music consumption continues to change significantly as a variety of competing platforms gain traction and young listeners, in particular, make their preferences felt. YouTube had the biggest weekly reach of any individual listening platform by far, with nearly half (49%) saying they had used it to listen to music, double that of its closest competitor, Pandora, which was cited by 24% of the general population. YouTube’s reach was predominantly driven by younger generations, rising to 68% amongst 16-to-24 year olds and 59% amongst 25-to-34 year olds, both significantly higher than the general population’s average of 49%.

There were also more notable milestones in consumer adoption of digital music: Spotify’s weekly reach (21%) surpassed CDs (19%) for the first time this year and Facebook emerged as a viable source for music. The social network saw 7% growth from 2016, upping its weekly reach to 19% to overtake Apple’s iTunes (15%) as the fourth most accessed audio platform. Amazon Prime Music also reached parity with Apple’s iTunes, achieving a weekly reach of 15%.

Spotify’s listening also skewed young. Its reach doubled among 16-to-24 year olds, with 40% of the demographic citing it as a listening source, compared to 21% of the general population. In addition, the difference between the two platforms’ share of listening (share of total time listening to music) was nearly even among 16-to-24 year olds (37% for YouTube vs. 35% for Spotify) and much less dramatic among the general population (33% for YouTube vs. 26% for Spotify) than their difference in weekly reach. This indicates that while YouTube reaches more people, younger Spotify users are more engaged, listening to Spotify for longer that YouTube users do to YouTube.

Meanwhile, Pandora’s weekly reach peaked at 34% among 25-to-34 year olds before dropping among older audiences. Amazon Prime Music followed a similar trajectory but peaked slightly older at 23% among 35-to-44 year olds.

In terms of format listening, despite being the most popular overall, time spent listening to AM/FM radio was low among younger audiences. AM/FM radio accounted for 17% of 16-to-24 year olds’ listening time (share of listening), half that of the average of 34% among the general population (see chart). Radio usage is instead driven by older demographics, with the format’s listening share growing proportionately with age, until peaking among 65+ year olds (47%). CDs showed a similar pattern, dipping among younger age groups before growing as respondents got older and peaking among those aged 65+. 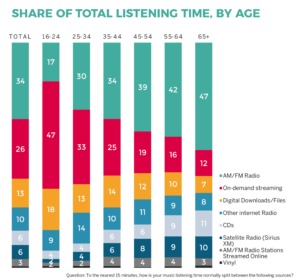 Crucially, AM/FM radio is still reaching two-thirds of 16-to-24 year olds, despite its low share of listening. In terms of reach (listened to for at least five minutes in the last seven days), AM/FM radio was relatively high and similar across the age groups, except, importantly, among 16-to-24 year olds, where it fell to 66%. Despite this comparatively lower reach, radio still succeeds in reaching the majority of younger respondents. However, it is failing to engage them, reflective in the minimal time they spend listening to the format, which is instead dedicated to online formats.

Moving to devices, the study found AM/FM radio receivers go relatively unused by 16-to-24 year olds (13% share of listening), as well as CD players (2% share), further illustrating their disengagement with traditional formats. Instead they favor smartphones, which received 34% of their listening share, and laptops, which accounted for a 16% share. The trend reverses as the listener’s age increases, with AM/FM radio and CD player usage increasing linearly and peaking at 65+ (42% share for radios and 12% share for CD players) and smartphone usage decreasing in the same fashion, with only 4% listening share among those 65 or over.

In addition, playlists created by streaming music services themselves are gaining influence on music consumption and curation. Among those who listen to playlists, one-third (33%) said they listen to those generated by their chosen service. Playlists users created themselves took the top spot with 54% of listening, and playlists created by a friend, followed expert, or someone else accounted for 13% of listening. Playlists also remain more popular than albums after overtaking them last year, with the general population saying that — between single tracks, albums, and playlists — they dedicate 28% of their listening time to playlists and 20% to albums. Single tracks were the most popular, accounting for 52% of listening time.

The free Music Biz webinar “Music Consumption: The Overall Landscape 2017” will be held on September 14 at 1 p.m. (ET), during which AudienceNet/LOOP representatives will provide a deep dive into the report’s findings. To register, click here. Following the webinar, Music Biz members will receive the full report free of charge. Non-members who want more information about joining Music Biz and obtaining the report may contact Nicole Hennessey, Music Biz’s VP of Communications, at nicole.hennessey@musicbiz.org.

“We’re happy to work with AudienceNet/LOOP once again to bring the most up-to-date consumer data to Music Biz members,” said James Donio, President of Music Biz. “Now that the industry has reached a period of growth, it is even more crucial to obtain in-depth data that paints a full picture of listeners of all ages. Only by listening to our audience and adapting to their needs can we bring the entire music business to new heights.”

“This study confirms that music consumption is just as diverse as the people doing the listening, with each age group embracing different services in their own way,” said David Lewis, CEO of AudienceNet. “Streaming behavior is also evolving, with Spotify gaining ground and platform-created playlists becoming a major listening source. We look forward to seeing how these trends continue to evolve as these services mature.”

The Music Business Association (Music Biz) is a membership organization that advances and promotes music commerce — a community committed to the full spectrum of monetization models in the industry. It provides common ground by offering thought leadership, resources and unparalleled networking opportunities, all geared to the specific needs of its membership. Music Biz brings a unique perspective and valuable insight into the trends and changes that innovation brings. Today, we put our collective experience to work across all delivery models: physical, digital, mobile, and more. Music Biz and its members are committed to building the future of music commerce — together.